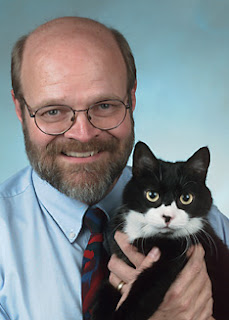 Dr. Richards was a mentor to many, a friend to feral cats, and served on the advisory board of Alley Cat Allies. The Cornell Feline Health Center has a tribute page here and here where those who knew him may leave their thoughts. NY Times article is here, added 4/27/07 . A lovely article from Good News For Pets can be found here.

Richards, the director of Cornell University College of Veterinary Medicine's Feline Health Center, was thrown from his motorcycle while traveling west along Route 221 in Willet, southeastern Cortland County, when he attempted to avoid a cat in the road, police records state.

A former president of the American Association of Feline Practitioners and author of the “ASPCA Complete Guide to Cats,” Richards was an authority on vaccination protocols for cats.

Christine Bellezza, a feline consultant who worked with Richards since 1999, said Richards had a defining feature that many will miss.

“His smile,” said Bellezza while fighting back tears. “He was a very happy, easy-to-talk-to man that everybody loved. He was always full of advice, you know, he was the fatherly type.”

Richards not only enjoyed working with his colleagues and cats, but riding his bikes.

“He loved his motorcycles,” Bellezza said. “All you had to say was ‘it was a nice day for a ride' and he would get a big smile on his face.”

Richards joined the Cornell veterinary college in 1991 as assistant director of the Feline Health Center, and was named director in 1997.

“He was the most competent feline expert, perhaps in the country, but even more than that he was just a wonderful caring person and a very dear friend to many, many people,” said Donald Smith, dean of Cornell's vet school. “Dr. Richards has probably touched more lives of individuals in the College of Veterinary Medicine than we could ever imagine.”

In particular, Richards was concerned about the students he taught and mentored, Smith said.

“He was a student adviser in several areas that had a deep impact on veterinary students in all four years of our curriculum,” he said.

Paul Maza, a feline consultant who worked with Richards for five years, agreed with Smith.

“Dr. Richards was a very charismatic man,” Maza said. “He was very outgoing, and he was very giving of his time to students and colleagues. He always had a kind word for everybody, and he was very encouraging. I very much enjoyed working with him.”

Richards' colleagues weren't surprised that a man who dedicated a good portion of his life to improving the lives of cats put such effort into avoiding a cat in the road.

“That just goes to show his level of compassion and appreciation, not just for cats, but for all living animals,” Maza said.

Richards is survived by his wife, Anita Fox Richards of Dryden, and two sons, Jesse and Seth.

A memorial service will be at 2 p.m. Saturday, April 28 at the Bethel Grove Bible Church, 1763 Slaterville Road, Ithaca.

The Ithaca Journal article can be found here

The above photo is from the Cornell University website 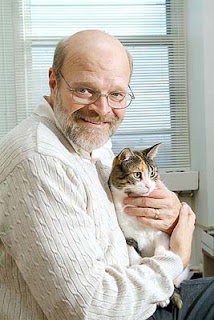 I think he was one of the vets who helped care for Colin in his Cornell visit. He was good at reigning in the student who suggested they could definitively diagnosis Colin's condition at autopsy, and calming my husband at the same time.

Generic Cialis Online post is good enough to make somebody understand this amazing thing, and Generic Paxil Online is sure everyone will appreciate this interesting things.