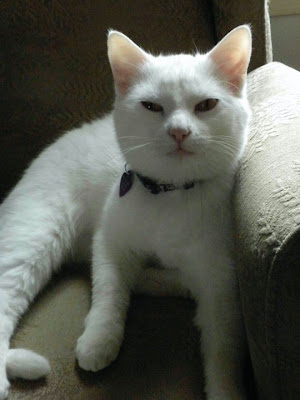 I came home tonight to a phone message from my mom, wondering if I had returned from my travels safely, to which she added "And you haven't been blogging..." and of course the only reason I blog is so that people I care about will know whether the cats and I are alive, dead, happy, or pensive.

I have to say, it has grown somewhat lonely in the blog world. There were a few key blogs I used to read that are/were sort of my kindred souls. Oh, they weren't people who were necessarily like me, but they are people whose writing for some reason struck a chord with me. But most of them have given up blogging and turned to Facebook and Twitter, which are entirely different critters.

That may be changing, with the advent of BlogPaws. Check it out!
Posted by Wildrun 4 comments

"Our family is now complete!" Thanks, iPhone! 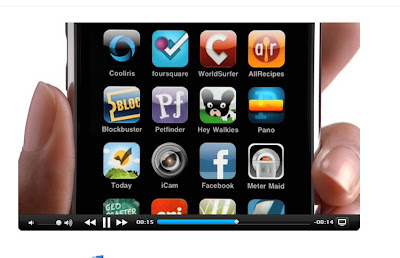 iPhone's newest commercial features the Petfinder app! You can watch it here. Post Note: No you can't--they changed it! I'll post another when I find one. WAY cool!
Posted by Wildrun 3 comments

The notice is short, but if you are near BCC tomorrow, join us at the Broome Community College conference on Environmental Ethics. I'll be involved with the afternoon panel.

I love it when that philosophy degree and cats come together. I'm looking forward to a fascinating day. If you have the chance, join me!

Free and open to the public.
Posted by Wildrun 0 comments

No power again except in one room...

...of the cat facility again!

It has to be the house breaker (which is a double, but with one switch). So do I change it myself, or call the electrician again? Apparently the spiritectomy didn't work. First I am going to unplug all of the heaters. It's possible one has gone bad. But wouldn't a breaker flip off? They are all still ON but I have no power in three quarters of the cat facility. 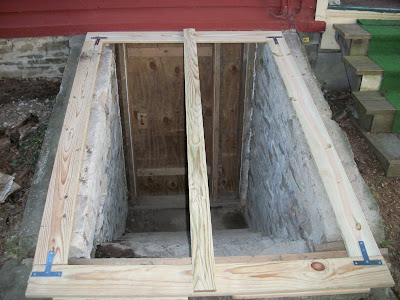 However I did get a start on the new doors to the cellar. I hope I have enough plywood in the barn so I don't need to buy more. I also found some 1/4 plywood in the barn I did not know I had, which would be great for the stairwell in the cat facility (after ripping down all that drywall someone slapped up there in tiny chunks, not to mention the strip of insulation!)
Posted by Wildrun 3 comments

Longfellow and Wiggles. Just the sweetest... 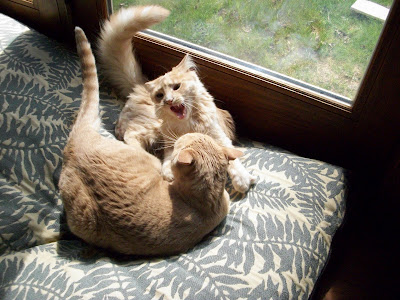 ...well, sometimes... Good thing I have a lot of pillows to throw.
Posted by Wildrun 2 comments

And suddenly I realize it has been a week(s) since I've last blogged. My apologies to those of you who click here every day, hoping to see something new.

In celebration of Holly's black Jack finding his way safely home, Mary sent a photo of her buff Jack peacefully sleeping. I also have four or five photos of other Wildrun alumni that I need to get posted here. You see? There's no excuse for me not blogging, as I've been sent plenty of subject matter! 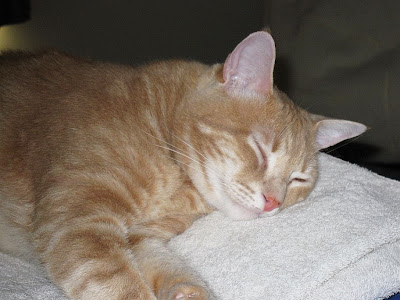 After a brief warm stint when the windows were flung open wide, we are back to chilly weather. I went out to the cat facility and all the cats were snuggled up with one another. And if you could see pudgy Wings and fuzzy Leo in full snuggle, you'd know why I wanted a photo. Of course, by the time I came back out with the camera, they were all lined up, wide awake and expecting treats. I did manage to get one photo of Nellie and Ivan in the house in the sun, trying to pretend it's still warm. Nellie continues to become more and more part of the household since Norma passed. I even discovered her sleeping with me when I woke from a nap this week. She is affectionate with all the other cats except her brother Squeak. She and he wrestle to the point of near-pummeling, but I suppose that's how it is with siblings. 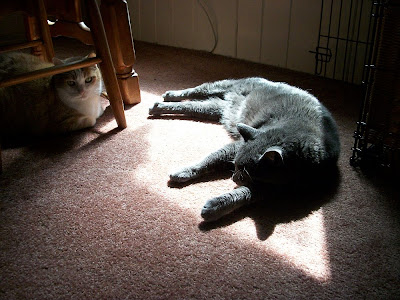 Yesterday morning I went out to the cat facility and it was COLD. The heaters were off. The reason the heaters were off was because there was no electricity. The barn electrical box seemed fine, so I checked the connection in the house. None of the breakers were tripped, but there was a sizzling noise near the barn breaker. I turned it off and the sizzling slowly went away (not immediately). Not good. So I called a local electrician and he came out today. Of course, we didn't find a thing, but it was worth the $75 to open up both boxes, pull the breakers, and make sure nothing was overtly amiss. So I'm off to Home Depot now to purchase smoke detectors for the basement (I have ten smoke detectors in the house proper, but not a single one in the basement! How stupid!) and if I notice any other problems I'll give him a call.

This happened a number of years ago, and I paid a similar $75 for another spiritectomy. Electricity is the resident ghost of all old houses, and one to be respected. 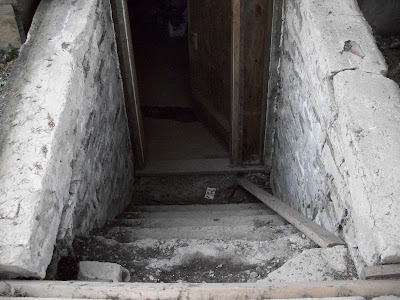 This however, brings another project to light, which is A) cleaning out all the spider webs in the basement and spraying egg sacks, etc BEFORE they hatch so I can venture into to my basement without squeaking and shuddering this summer and fall and B) cleaning and repairing the outdoor entrance to the basement. I priced out a metal door for it last summer and about choked. It was going to be something like $600 dollars! So I'm going to build one from pressure-treated lumber instead. Today I'll pick up the wood for the frame, and will clean up the debris in the stairwell. I'll ultimately build a frame around the two stairs that need to be re-formed so I can pour cement, but I won't do any cement work until summer is here.

It's been positively busy here this morning. The electrician came and went. Buck came with a friend and they are hiking up to do some work on the cabin. My neighbors came to pick up their cat Oliver, who was boarding for a week. Oliver comes here about twice a year when they travel and gets a brush out and butt-clip (he's a fat fuzzy boy and needs some grooming help). He even got "real groomer" attention because Nancy of The Grooming Room was here yesterday. Nancy is the adopter of Gizmo (formerly Paddles).

I even have a new photo of Gizmo: 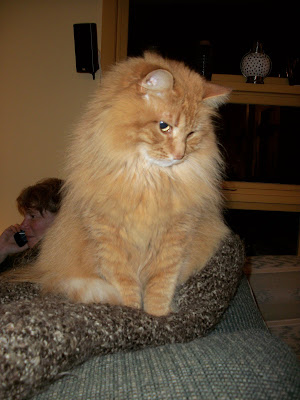 The facility cats probably don't even know what to make of all the attention.

Surprisingly, the cat-room cats--who were at liberty in the cat facility this morning--were amazingly friendly to my neighbors. They all stayed put and didn't scatter when we came up, and Plushie immediately ran over to make friends, and kept trying to interpose herself while I was giving Oliver a final brush out. Their son spent some time scritching Fluffy.

I hope this a sunny day where you are as well, and you all have a wonderful Sunday!
Posted by Wildrun 0 comments

Holly's Facebook page reports that Jack was found this morning. I can't even begin to express how much better that makes the outlook for this week. Jack lived here a LONG time (8 months?) before he was adopted, and I'm so relieved he is safe and sound.

Just a note: Holly's message to me on my Facebook page, telling me Jack was lost and asking for help, did not show up until two days later! So if anyone appears to be ignoring you, perhaps it's not them...perhaps it is a delay in your post to them.
Posted by Wildrun 3 comments

I detoured through Cayuga Heights on my way home...

...knowing that it wasn't likely I'd see Jack, but figuring it couldn't hurt to drive around a few blocks and look for eyeshine. And to drive by the area and not at least look seemed...wrong.

One of the best websites for information on "thinking how a lost cat thinks" is the Missing Pet Partnership. I'm headed over there now to read it over again.
Posted by Wildrun 1 comments

A happy Easter to you all... 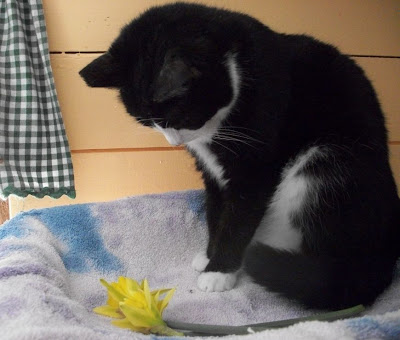 Faith came through her dental just fine. That's why we do pre-adoption vet checks for cats that have been here awhile. The vet finds things we don't. She needs a few days to recover and will be off to her new home this week. 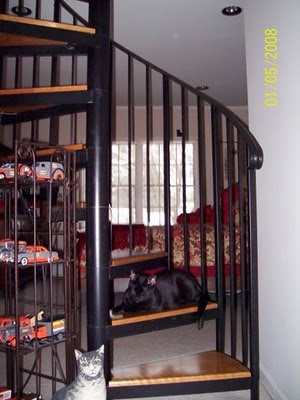 Jack is lost. Luckily it is from his home here in Ithaca, not at the lake camp where he visits. Holly is posting flyers.
Posted by Wildrun 0 comments