Sweet Portia is all fattened and glossed up, ready for a home. I had one inquiry about her from someone who lost a declawed black cat this summer. I sent this video off to them. Another person saw the "found" post on Craigslist and emailed about adopting her. I sent them off our application. She doesn't like other cats so needs to go where she will be the one and only center of someones universe. I'm not sure how she does with dogs. Perhaps I should subject poor Molly as the dog test. We'll see! But she sure is an easy keeper. Uses the box, never makes a mess, eats up her dry food, no fuss at all. And she will cuddle with her back against your chest in bed, and purr and purr and purr....
Posted by Wildrun 4 comments 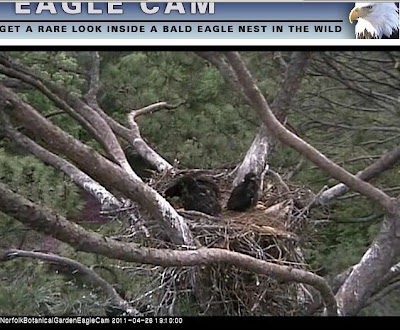 Sadly, the female of the pair of eagles featured on the Norfolk Botanical Garden eagle cam was killed when struck by a jet at an airport. Countless people have been watching the eagles nest and raise their young. The eaglets are feathered out, but are prone to dehydration if they are not fed regularly. If the male is unable to care for them, they will be removed from the nest.

It is always sad when something so simple and beautiful turns into a tragedy. It reminds me of a person who rescues their first cat, only to discover the cat is ill with FeLV and what was going to be simple and sweet and beautiful is now difficult and perhaps heartbreaking. Life never proceeds according to plan.

I got an email today from a former colleague at Ithaca College who has had kittens dumped on her road nearby. I'm listening to the thunder roll, and am hoping so much that they brought the kittens in and they aren't still out there. I've emailed back to check. I really have no room for kittens, but it is so hard to listen to the rain pouring down and know they are out there, and someone has contacted us for help... How do you say no? Then what steps do you take to keep from become overloaded, and yet another one of a growing list of hoarders?
Posted by Wildrun 1 comments

...if there were not so many cats to fix in the world. 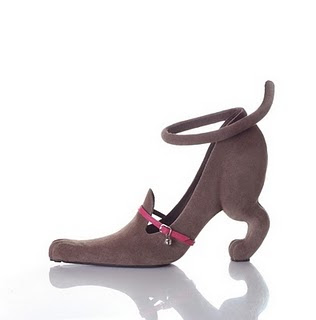 You can see them here

Ups and downs and ups

Well, I thought there was a new home for Zootie, but they went home and thought it over and decided they would like an older cat. Poor little Zoot. Maybe three times will be the charm.

The cats in the cat facility have been a life-saver/life-charmer lately. They have been sweet and affectionate, and continue to keep me sane. Handsome hard-to-get Tiger Tom was actually photogenic tonight. 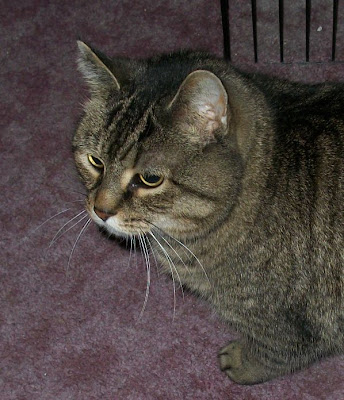 Christy called last week. A terribly thin grey cat had showed up at their door. Maeve is slowly putting on weight, and a little pyrantel seems to be clearing up her wormy digestive issues. She was the skinniest cat who had ever come my way. You can't really tell in the photo, but you can grab right around her middle. She's bright, active, and healthy. She was dehydrated when she arrived, but was plenty willing to eat and drink. I'll need to get her advertised in case there is someone out there looking for her. 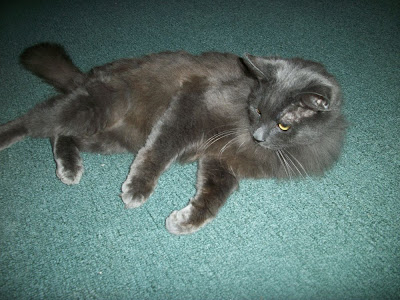 Pauli the white and grey cat is neutered and FeLV/FIV negative, but has diarrhea that just won't quit. He has been wormed with everything I have without effect, so I'll take a stool sample in. I SO hate spending $40 just for parasites, but there is no sense stabbing in the dark, and I don't want him to give whatever he is carrying to my own cats. In fact, I'm moving him downstairs because I'm afraid he'll toss kitty litter out onto the floor where the healthy kids could pick it up. I would guess the issue is giardia.

Speaking of giardia ("beaver fever"), I was driving to Norwich, and there was a hit-by-car beaver right in Rt 13 in the middle of Ithaca. On the way home, on Rt 23 by Cincinnatus, I passed a new beaver dam, and pulled over to take some photos. 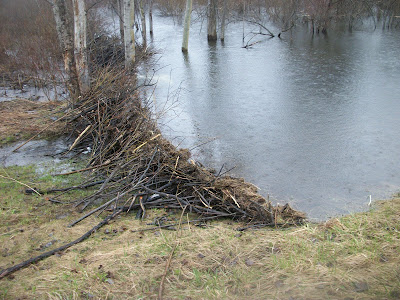 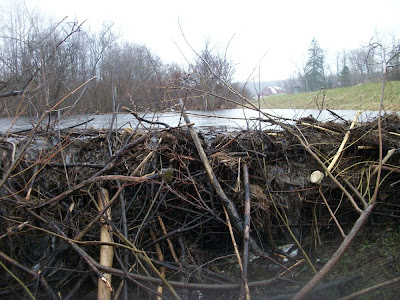 Beaver fascinate me. They are the most amazing animals. At a wildlife rehab center I actually got to go down a ladder into a man-made beaver lodge and pet and touch a rehabbed beaver who could not, by law, be released. I've live-captured them myself in Hancock cage traps. However I couldn't deal with the NYS requirement that they be killed, even if live-trapped, so I stopped doing beaver control. Mark and I put in a few flood control devices (so beaver can stay, with the pond level under control). It was an interesting few years.

You can see how close this dam is to the road. I'm guessing the highway department will be tearing it out soon, before the beaver get too well established. 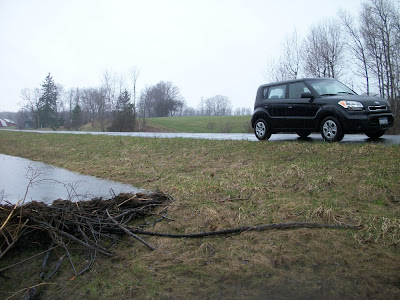 So amazing, and so beautiful.
Posted by Wildrun 1 comments

Look who's happy in his new home 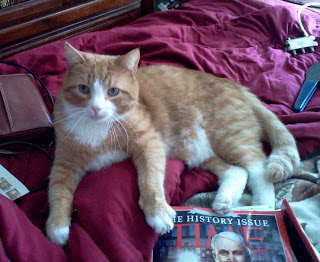 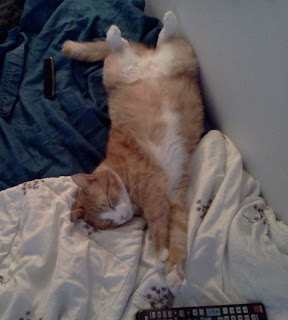 Sir Morgan looks so good now that he's just merely plump instead of overweight! And happy and relaxed. I miss him, but I'm so glad to see how he's settled into his new home.

I was having a bit of a crabby day yesterday...then I opened my personal email and found photos of Morgan peeking out. It turned my attitude right around and I was walking around the house beaming.

I would never have all these great people in my life if it weren't for the cats.
Posted by Wildrun 4 comments

There is still some staining that can't happen until the weather is warmer. 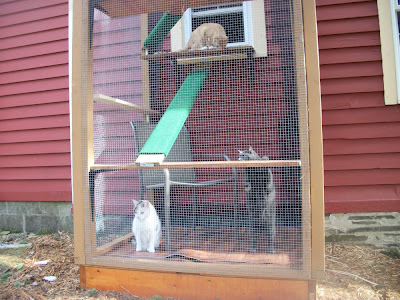 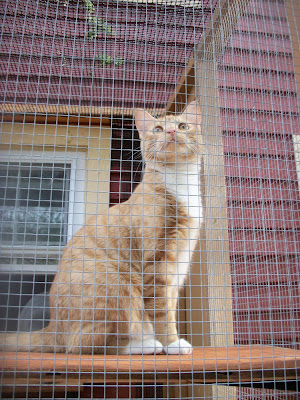 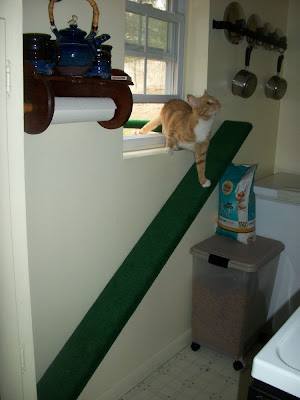 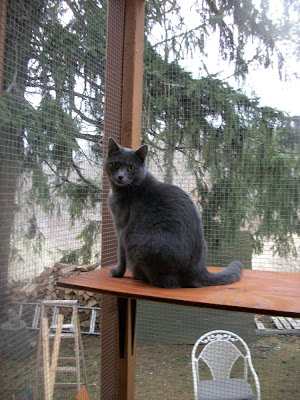 They seemed to enjoy being outside when I was there, but as soon as I came in the house, they all came in as well. I think it's still a bit cold out there, and perhaps somewhat overwhelming.
When I was in line at Home Depot with a cart full of lumber to finish the enclosure and the barn windows (not done yet), an older woman sweetly stopped me and said "are you a carpenter?" I thought maybe she wanted to hire me to do some work so I assured her that no, not really, I just did projects around my house. She smiled and said "I just think it's wonderful when women fix things on their own."
That made ME smile.
Posted by Wildrun 10 comments