Oh yeah, we can see THIS is going to be LOTS of fun!

Donna (Espie's adopter) called me up the other day. "I'm having a rummage sale and have a few cat things." One of which was a kitty water fountain--one of those things I've always meant to try, but never was willing to part with the funds. 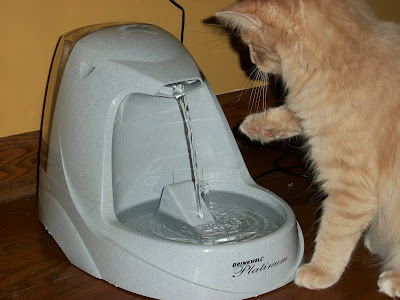 Unfortunately I can't put it in the cat facility because it can't support any more electrical items. But the foster kitties in the house think it's great. My next step is to cut a section of the "wood-look" vinyl that my mom gave me because I think there is going to be a little issue with paw-splash.

Longfellow has been at it for ten full minutes. I can hear the splashing noises from the next room. There is a line of cats waiting for their turn to check this odd thing out, but they may never get a chance!
Posted by Wildrun 3 comments

The eyes on the blog are losing their spark

Ditzy, the cat who has lent her beautiful eyes to the banner on my blog, is ill. For a cat who is remarkable for her attitude, it's sort of sad to see her going so quietly. It was clear something was up three weeks ago when she relocated her sleeping spot to the top of the armoire and decided she was only coming down for trips to the cat box. She perked up and chowed down on Fancy Feast dry (in her own little bowl on top of the armoire with her) and began to think that perhaps she had just chosen a new nesting spot and she wasn't ill at all, or was perhaps only suffering from progressing senioritis.

Really, though, I knew better. Those of you who have had a few senior cats pass on have learned the signs. The pauses when moving from Point A to Point B. The small increased effort in breathing (cancer). The increase in time hovering over the water bowl (kidneys; diabetes). The abandonment of favorite spots, to new sleeping areas that say "Leave me alone, all you other cats."

I can probably get her into my own vet today but I'm checking with home-visit vets first, because I really would prefer to just get a heart/lung once-over for her here at home first without subjecting her to a clinic trip.

Those of you who know Ditz will understand why. This is a cat who goes into full scream as soon as you pick her up, and will yell like a banshee while you are petting her, then turn around and come back to be petted again. There was never anything normal about Ditz, which is precisely what makes her so endearing. She eats wood ashes and licks iron, paces in front of the bow window like a caged lion (the runs over to be petted when you call her name), has double-paw smack-fests over my knees with Ivan when sleeping in my bed (to the point where I have to prop a pillow on my side to prevent eye-contact), despises kittens, but nonetheless frolics and plays as happily as a kitten herself and purrs her head off if you scratch her cheek.

She's one of those cats who is so prickly you figured she would live to be 25 just to spite all the other cats in the house.

Apparently not, though. She had nice pink color the other day, but her color is lousy today. She's quietly enjoying being petted, rolling into the caress. Could it be that the cat who spent her life snarling like a devil has decided to depart fast and purring?

I really can't imagine this house without the Ditz. We'll see what the vet says.
Posted by Wildrun 6 comments 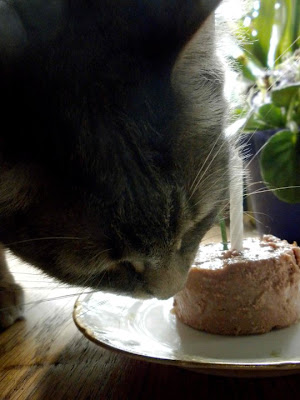 Here are the baby photos.

Christy and Gordon, you spoil those kitties so. You want to grab Audrey and come out for a morning fire someday?
Posted by Wildrun 5 comments 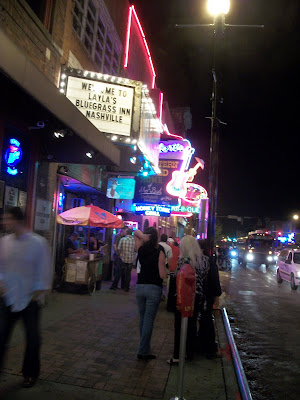 I continue to have to pinch myself--I have a job in which I travel. I would never have chosen a traveling job, but being told "Go forth and Speak" I do so. And I am always grateful for the opportunity once I get there. 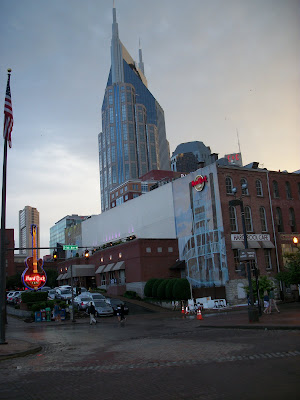 I don't know what I expected for Nashville. Something bigger. Something smaller. I surely did not expect the beautiful balance between big and small. Tall buildings but quiet street traffic. I did not expect the intimate bustle during the day (music, music, music, all day) or the literal teeming hordes of people toward midnight (I fled back to the hotel when the sea of humanity began rolling down the hill).

I wandered Broadway alone twice and with friends once, and wish I'd had more time to explore (more photos here.) On these three day trips you really only get a glimpse of a city, and certainly don't learn much about its soul. 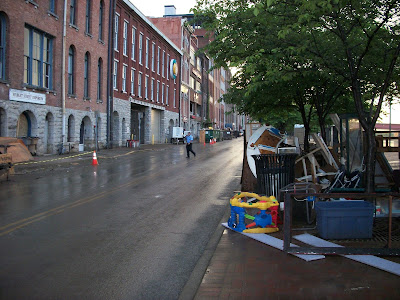 Nashville is of course recovering from their flood. Were it not for the huge disaster response teams pumping water out and air in, and the smell of mold when you descended into the once-flooded areas, you would never know. The mud, sticks, debris that must have been thrown into the streets, are gone. 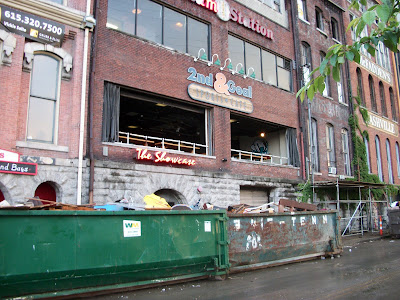 The damage remained, of course. Waterlogged belongings lined the lower streets. Dumpsters collected ruined drywall and items that building owners probably wished they'd removed from cellars years ago. Nonetheless, businesses were opening the moment they could catch their breath. 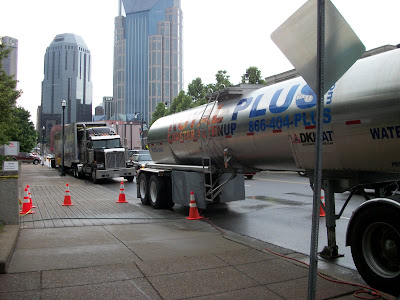 Flood response companies lined the streets. I'm sure there are outlying areas that are utterly mud-stricken. But in Nashville, I got the feeling that every living human had gone out with a broom and a plastic bag, and said "Begone filth!" as soon as the water receded. 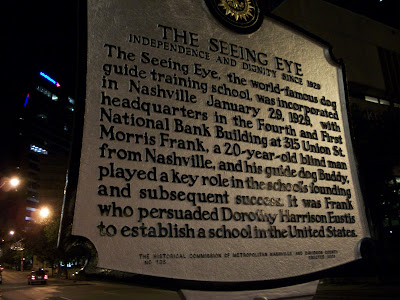 I was impressed that every intersection had audible crosswalks, but it wasn't until I took a doubletake at this sign that I realized that might be because The Seeing Eye had begun in Nashville. 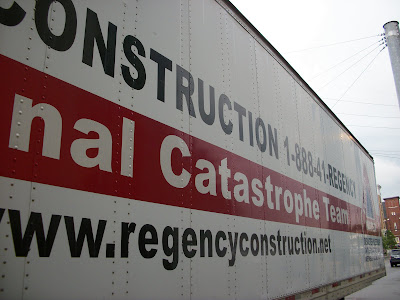 I would go back. I WILL go back. I love music. More than recorded music, I love live music. And more than professional live music, I love up-and-coming living music, because the talent is incredible. Our society lauds the vocalist, but I love strings in any form. As soon as I stepped downtown, the open windows and door spilled music. I'd like to find someone with similiar likes, and go back.

I pressed my nose against the window of a guitar/mandolin shop while I was downtown. It was closed. I came by the next day, before leaving for my plane. I picked up a two-point and looked at the price tag before I touched the strings. $7000? I picked up the next one. $7000. How many $7000 instruments could there be in one store? Given that t-shirts in the store across the street were $80, I stopped flipping price tags, figuring that the prices were for dickering. I wandered over to the straps. Maybe I could bring home a mandolin strap from Nashville? Nah...$50 for what a local craftman in Ithaca would sell for $30. So I came home with a chord chart--yes, just a chord chart, for $5.95. But to be in the presence of that many mandolins....wow. I wish I'd taken a photo. 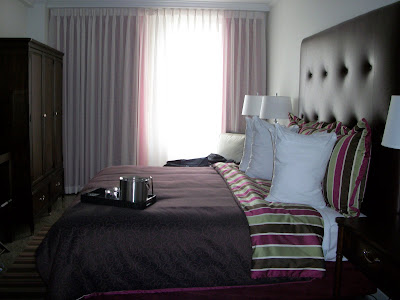 And then there are the hotel rooms. When I was "on my own" and went to animal welfare conferences, I saved up all year for the single conference I could afford to attend. And then I looked for campgrounds because I could never afford the conference hotels. Frankly, I froze my butt off one or two years, when my chosen conference was in April or October. I sometimes threw a futon in the back of my truck (when they were new) and slept in the parking lot.

Now I get to stay in hotel rooms. Every time I open a hotel room door, I feel like I'm in a fairy land because I'm warm and I won't have to brew my coffee over a fire. And you know what? The cheaper the hotel, the better the wireless connection (really!)

In Nashville, post flood, you took any room you could find, and the hotels (at least ours) did NOT gouge and the price was surprisingly reasonable.

If you have a great decorator, you can take a room that you can nearly touch wall to wall with your outstretched arms, and make it look pretty darned nice.

The wireless was awful. But the room and the view was gorgeous: 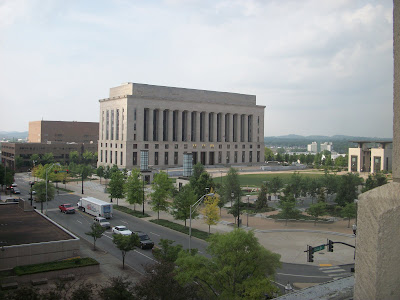 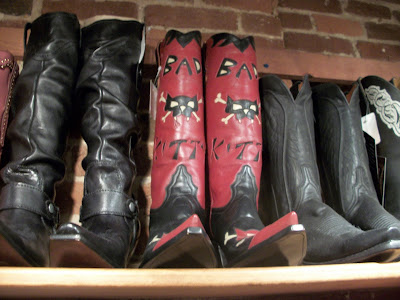 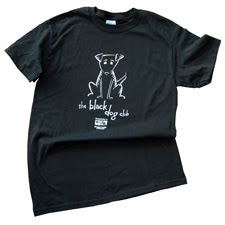 Cool, huh? A Black Cat Club would be just as neat.

Thanks, Lynn, for sharing that.
Posted by Wildrun 3 comments 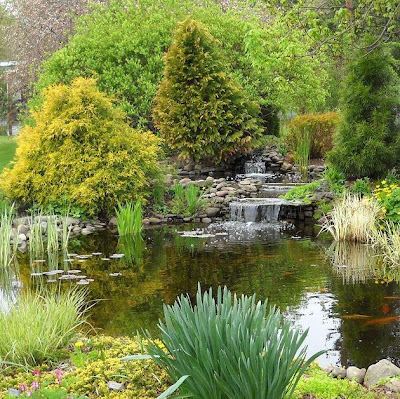 This is Totalily Water Gardens. Tim and Donna not only care for this gorgeous business, they also take care of the Wildrun cats when I travel, which is a LOT. How do they do it? I don't know.

If you are local, you should visit. And if you decide to add a water garden to your landscape, and it is over 2' deep, I have two goldfishes that have grown too large for their tank who need a home.
Posted by Wildrun 1 comments 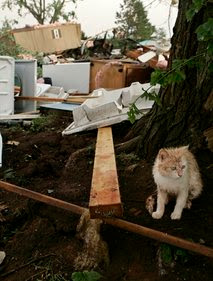 AP Photo from tornadoes in Oklahoma.

Between tornadoes, floods in Nashville and Kentucky, and oil polluting the Gulf by the millions of barrels, this has not been a good month for man nor beast. Even here a strong wind swept through, dropping a huge pine across a whole driveway full of cars in Spencer. Luckily I only lost a gas grill and a few branches (yes, the gas grill went end over end over end...it's history). What is a gas grill compared to losing your home or your life?
Posted by Wildrun 1 comments

Purina coupons for May 2010

can be found if you click here.
Posted by Wildrun 1 comments 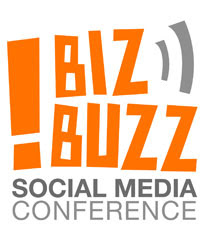 Check out the BizBuzz Conference right here within driving distance in NYS. It's May 27-28, in Syracuse. Learn how to use Social Media to benefit your business or nonprofit (Facebook, Twitter, and beyond). Anyone interested in going?
Posted by Wildrun 2 comments

...only now his name is Julius. A handsome name for a handsome cat! Adrianne, his adopter, sent in his photo today. Isn't he grand? 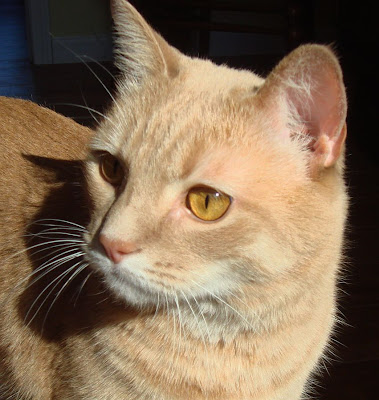 You can click here to see little Nibbles when he was a kitten.

It's always so wonderful to see them when they are grown--and well loved.
Posted by Wildrun 1 comments