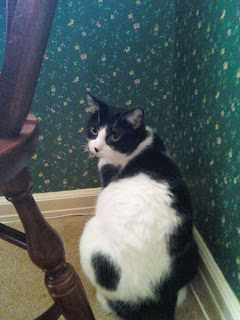 Emmi is proof that adopted cats that come back can get great second homes. Emmi's second home ranks waaay up on the "seriously spoiled" meter. She's a lucky kitty. Although I'm not certain why she's in the corner in this photo. Perhaps she was stealing turkey off the Thanksgiving table?
Posted by Wildrun 2 comments

And so we return to a game we have not played in awhile: "Name that Airport." 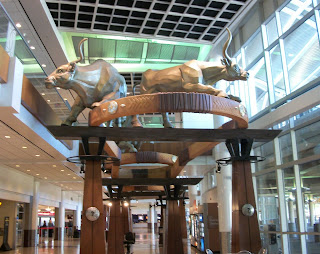 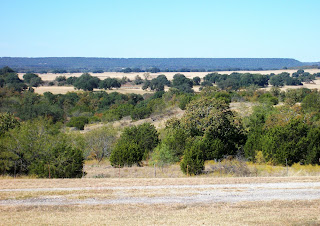 Zuzu and Jasper check in.

As usual I am behind on my email. Stephanie sent photos of ZuZu and Jasper a few weeks ago and I am only just posting them. In the second photo they are chasing a laser dot.

Here is the handsome pair: 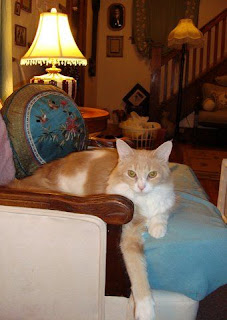 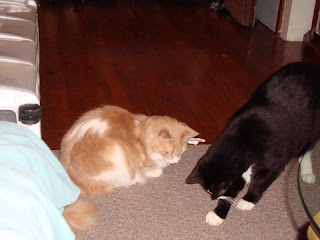 I've been traveling quite a bit for work and haven't been keeping up the way I should. It occurred to me that I never posted that Owlie was adopted. I believe I was holding off in case he didn't "stick," given his nervous tendencies and very loud voice, but it appears Owlie is doing great in his new home, and he'll benefit from the higher quality food he's now getting, since he has a tendency toward urinary issues. For once his big eyes and nervous ways worked out for him--sometimes the "sympathy factor" works.

Unfortunately, Owlie's adopter couldn't take two cats, but maybe that's a good thing. Owlie's sister Tinkerbelle is quite a bit more interactive since he has been gone, and you can carry on long chatty conversations with her on her bed in her run, now that nervous Owlie isn't laying right on top of her, using her as a shield. I should try to get some video of her conversations.. 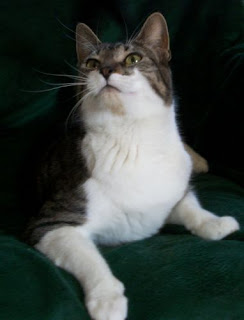 I lost the picture card from my camera, which peeves me to no end. I'm hoping it's around the house and I didn't leave it somewhere in Texas. So until I find it, I guess I'll have to post Owlie's Petfinder photo instead of the new shots I had taken a few weeks ago.

The second "long termer" to get a break from the cat facility is Dustin. She has a mysterious back issue that has been examined, xrayed, viewed by high-level radiographers, and determined "unknown." She flinches when anyone touches her back (but only when she's in a bad mood--the problem mysteriously disappears when she's feeling flirty). She has gone off to a guest room with my friend Diane to see how she is in a real home, because she absolutely the despises the young cats. This is quite odd, since she loves the other cats, Wings in particular.

So recently, life has been a misery for her with kittens around. She couldn't stay shut up in a cage to keep her away from them. I know that cats stay in cages at shelters for long periods of time, but I hate it when that happens here. So hopefully her break from Wildrun will be good for her and, if so, I'll do some major publicity for her and we'll work hard to find someone who will adopt her. She really is a cute thing, and she loves being cuddled and combed. But you have to scoop her up rather than pick her up from the middle. You can comb her back, but you cannot lay your hand on it. SO odd.

When fall travel for work is over, I plan on going on the publicity rampage to get some of these older cats adopted, in addition to the younger cats. A lot of the reason cats stay here so long is because there are not enough hours in the day to A) work, B) care for the actual cats and facilities C) promote them, D) meet with adopters, and E) provide follow-up support.

Follow-up support is something most people getting into rescue do not take into consideration. It is an integral part of rescue, and even shelters provide follow-up and behavioral help. Rescues often even provide financial help. I'll post about that later today.

Luckily many adopters "self-report"--which is a huge help. They may not even realize how great it is to get those "Fluffy is doing fine and she and Tiger are now inseperable" emails, because it means we know the adopter will likely let us know if problems occur in the future, and they are now checked off the list of new adopters that need to be contacted. With pediatric spay/neuter, at least I don't need to be tracking down adopters to make sure adoptees get fixed. But if a new adoptee breaks with an illness immediately after adoption, it often is due to something they were exposed to with the rescue, and in my opinion, is the responsibility of the rescue to help resolve.

Some adoptions just don't work out, and the cat or kitten needs to be returned. This is why adoption is particularly hard if I'm due to travel. I can't just shove kittens and cats off into home and they fly off across country. In an emergency, I have good friends who could help out if a cat needs to be brought back to Wildrun, but in general I would just prefer to be home for a few days following an adoption.

Trying to be "perfect" however, means kittens and cats don't get homes as quickly as they ought to. So striving for perfection is often not good for the cats. It can even lead to hoarding if "I want to do this well" turns into "Nobody can do this as well as I can."

That's why it's time to lobby for these long-termers. Cats like Fluffy may be here for good, but certainly Tiger Tom and Leo are adoptable and deserve the same kind of special relationship that we all have with our "one-and-only cats."
Posted by Wildrun 1 comments

I posted this video to show a presentation audience how easy it is to add a YouTube video to a blog, and forgot to not that it's not one of MY colonies. It's a beautiful thing to watch.