TigerTom in his new home

On Sunday I delivered TigerTom to his new home with Georg and Jazz in Endicott. Georg promised me she would keep me updated via Facebook, and she has been true to her word. This is good, as otherwise I would likely be a basket case, since he is such a shy boy. Any one who knows TigerTom won't be surprised that he hid in his little box in a caterpillar ball. 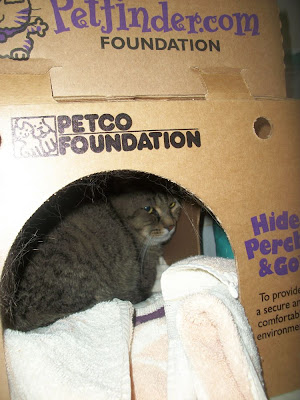 Tonight, there was some very good news on Facebook!


I sat down next to Tiger Tom, while he was in the shower stall. Not only did he do serious rising butt syndrome, he rolled over and let me have the belly, and rubbed his face against me. Then he stood up and purred. And walked out of the shower stall. It was wonderful.

Then Jazz approached the door, and he ran back into the shower stall. So I left the bathroom and he repeated it all for Jazz. Progress!!!

They are going to let him graduate from the bathroom to their office tomorrow.

I'm so glad he is coming out of his shell--even faster than I would have expected.

On my way home, coming through Owego, I had to turn around to take a shot of a Shelter Pet Project billboard! 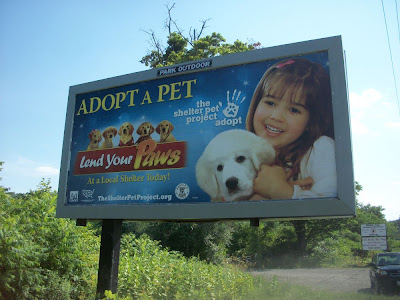 He's been playing peekaboo with me this morning, coming out from his hiding hole and staring at me behind the door.

Then he actually came and sat by the gate, and sniffed our cats through the gate, nose to nose. There was some hissing, but not by him. So yes, he's definitely ready for the gate to move. :)

Congrats to TigerTom & his new family. It sounds like the perfect match was made.